Life Lessons from a Horse 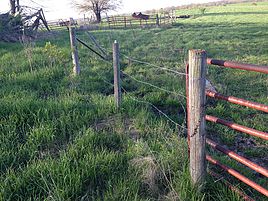 Who knew so much could be learned about oneself without saying one word? After just a couple of hours working with Kim’s awe-inspiring horse herd, I have a new appreciation for the power of nonverbal communication. I notice how my daughters and wife feed off of one another’s emotions, and mine, without any of us saying a word. Moreover, I understand how easy it is to use this emotional influence to quickly diffuse a high-stress situation at work. Here’s the story of my memorable day of learning with a human and her horse partners.

I left the safety of I-35 South one brisk morning in early May to embark on a new and transformative adventure. The exit ramp slowly morphed from the straight and never ceasing interstate into the quietly rolling back roads that make up most of the Iowa countryside. These roads were built to work with the landscape, to ebb and flow with the changing topography, instead of cutting right through it. I could no longer speed along at 75 miles per hour while the world raced by my windshield.

I had to give these roads the time and respect they deserved. I found myself taken aback by the beauty that surrounded me—the vast tracks of open space full of the first shoots of spring grass, the barren hills spotted with newly budding trees, the intricate creeks cutting paths through black dirt. Little did I know that these roads were actually preparing my mind for the process of rediscovery that was about to fill the remainder of my day.

Thirteen miles west of I-35 sits the town of Grand River. My adventure began in the parking lot of the Silver Spur—about one-fifth of the businesses keeping the town alive. Kim Waltman, a marketing communications professional in her city life and cattle ranch and row crop farm co-owner in her country life, pulled up in her Suburban to save me from having to take my SUV on the gravel roads.

We met in early January after she responded to a blog post I wrote about a New Year’s Resolutionanyone could keep. She shared her story of growing up in the city, owning her own marketing company, and re-discovering her cattle ranching and entrepreneurial roots. One of her business dreams is launching an equine-guided human development division of her business. By partnering with her horse herd, she will teach emotional and social intelligence skills for people at every organizational level to implement in their work environments. For too long, traditional approaches of corporate training programs to help improve social and emotional competence of adult workers has been ineffective. Teaching emotional and social skills requires real, non-judgmental, unbiased feedback coupled with the ability to immerse individuals or teams in the experience of seeing and feeling. By partnering with horses, people have real-time interactions that help them become more aware of their internal emotional state and how that state impacts others. She included me in this dream by inviting me to be a guinea pig and embark on a day of learning.

I was filled with excitement and curiosity as I climbed in to the Suburban and fastened my seat belt. Kim glanced over and laughed, “We don’t usually wear seat belts down here.” Yep, I was definitely no longer in Des Moines. The paved roads turned to gravel and I found myself gazing out the window watching the sun climb higher in the sky as my anticipation grew. A “DEAD END” sign indicated that we were arriving at our destination.

The 1950s barn stood behind two sets of gates and miles of fence. The Suburban crawled through the

pasture as Kim maneuvered around the ruts and ridges of the open land.  We found the herd casually grazing in one of the lower fields. After some gentle coaxing with a bucket of feed corn (and the Suburban’s horn), the herd made their way into the corral.  The fun was about to begin.

Kim explained how the training would work. Horses are masters of non-verbal communication. So much so that they are affected by emotions and sudden mood shifts in ways that humans are only just now beginning to understand.  She explained how recent studies have shown that horses notice anxiety and stress (even the most subtle changes, like an increase in blood pressure, breathing patterns and heart rate) in their human counterparts and respond through body language (by walking away, moving their ears, licking their lips, etc.).

I think she sensed my skepticism. A slight smile curled at the corner of her mouth as she handed me a halter and said, “Well, go find a horse that wants to work with us.”  To be fair, I should share that I grew up with horses. I later asked Kim if that was how she typically started a training session. She laughed and explained that she started her sessions based on the experience and comfort level of the individual or team. I had more experience, so I got thrown in faster than someone who had never been around horses.

I approached the herd, halter in hand, and tried to figure out what she meant by the vague statement, “Find a horse that wants to work with us.” I was acutely aware of the fact that no matter what each individual horse was doing—eating feed, grazing in the corral, or self-grooming—they all knew where I was at all times, whether they acknowledged me or not. I found myself growing more uncomfortable with each passing minute.

I began to question what I was doing. Did none of the horses want to work with me?  Was I sending out some bad vibes? Were they picking up on something that would make them turn away?

My fears were calmed when a muscular Palomino caught my eye and cautiously strolled my direction. “Yeller,” as Kim calls him, was the first horse to approach me and show his interest. I patted his neck as I slid the halter around his nose and head. He let me lead him into a holding pen. Relief fell over me as I removed the halter and shut the gate. I had my horse and now the training could begin.

Not quite.  Kim smiled again and instructed me to find two more horses. I turned back to the herd.

More time passed and I eventually found two more horses who were willing to partner with me, “Dale” and “Dolly.”  We released the rest of the herd into the pasture and began our journey. Kim handed me the halter one more time and told me to figure out which of the horses really wanted to work directly with me. It was quickly apparent Dolly really wanted nothing to do with me. She didn’t allow me to even touch her let alone put a halter on her. Yeller was nice, but my inner voice was encouraging me to work with Dale.  I approached Dale and, after some gentle patting and a few soft words, secured the around his head. Kim explained that the first exercise would consist of four different parts all centered on leading Dale around the corral…

Part one consisted of me thinking about nothing but myself; really concentrating on the fact that I was the only person that mattered or who held any importance. This was extremely awkward for me, and Dale could tell immediately. We did one uncomfortable lap around the corral. He was confused, stopped frequently, and only moved forward when I really tugged on the lead rope. Kim instructed me to make a mental note of how that lap felt so we could analyze it later.

During part two, I was instructed to pick an item in the corral to concentrate on for the duration of the lap, a fence post or watering bucket, and focus all of my attention and energy on leading Dale to that item. This lap was significantly easier, although there was still some tension in the rope.

The lap we took during part three was the most eye-opening. The goal: Lead Dale back to the same item, but instead of focusing on the item, I was to focus only on Dale. Kim told be to think about him in the way I would think about one of my daughters or wife. I patted Dale’s neck, looked at the bucket on the other side of the pen, thought about how much I liked this new horse friend, and went to take my first step. I was shocked to find that I was falling backwards because Dale hadn’t moved an inch. He nestled me with his nose and his eyes were practically begging me to pet him. We stood there for a couple of minutes in silence as I stroked his neck. Then, slightly begrudgingly, we made our way to the bucket only moving when I changed my focus from Dale to the bucket.

The final lap for part four combined the three previous parts into one fluid thought process. Kim asked me to take the three pieces, myself, the destination, and Dale, and combine them into an all-encompassing thought or vision of where we were going.  Only by realizing each individual piece was a part of the greater whole could I truly begin to lead Dale, and ultimately, myself. We stood in silence for a minute while I centered myself and went through the previous lessons in my mind.  And then something magical happened. I took my first step and Dale followed suit, matching me stride for stride. The lead rope went slack and I was no longer forcing Dale to follow my lead. He was doing it willingly. Better than that, he knew where we were going, he could sense my determination, and he wanted to be a part of the journey.

We practically ran around the corral together as one, single unit.

The day quickly passed, and by the time we wrapped up the final exercise, it was time to start my

journey back to Des Moines. My mind swam with the experience as we thanked Dale and the other two horses and released them back with the herd. Kim left me with my thoughts as she dropped me back off at my SUV, still not wearing a seat belt. I pulled back onto the I-35 a little sadder that I would be going back to the pace and grind that exists in today’s world. My speedometer quickly hit 75 MPH again, but this time, I actually looked out my windows at the world speeding by instead of only focusing on the never ceasing black and white repetition of the blacktop.