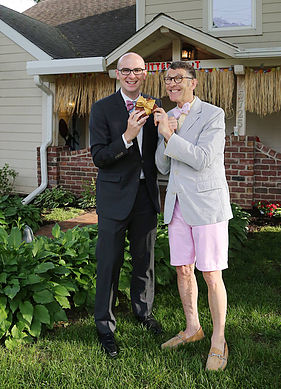 A little over a year ago I started to notice a trend on my Facebook feed.  Every Friday morning a dear friend of mine, Christopher Maharry, would post a picture of what looked like some deep fried blob of goodness.  Along with this picture was the hashtag #FF. Over the next weeks I tried to decipher what this image and #FF meant together.

My curiosity eventually got the best of me and I texted Christopher for an explanation. “What does #FF mean?!  Fatty Friday? Fried Food? Tell me!”  He responded that is simply stood for “Fritter Friday” and the fried blob that was pictured was his weekly treat – an apple fritter. I asked if I could join him the following week. “Of course” was his reply.

The next Friday we met at Donut Hut on Douglas and enjoyed one of the best apple fritters I have ever tasted. It was fried to perfection with a light center.  Just enough apple pieces that it held together without being too doughy. Dunked in some coffee, it was breakfast perfection.  Over the next months we met on and off almost every Friday to catch up and share in the fried delicacy that is an apple fritter.

We started posting pictures on Facebook every Friday, declaring it Fritter Friday to the world. That’s when the unexpected happened: we started to garner a following. Different individuals from our social circles began attending and enjoying fritters with us. People asked for updates, times, and where they could get a fritter. Others posted pictures of themselves from other states, even other countries, enjoying a fritter on Friday mornings.

Late in 2014, after a rousing conversation about halfway through our fritter, Christopher looked at me and said, “Hey, what are we doing with this?  We both have huge networks here in Des Moines and with Facebook. Let’s have an open house at my place and raise some money for a good cause.” It sounded just crazy enough to work. After all, who doesn’t enjoy fried food and raising money for charity?

In May, Christopher held the first ever “Fritter Friday Open House” at his home in Des Moines. People came from all over the city, some in cars, others on bikes, still others walked. There were decorations and fritter selfies. We had coffee and other drinks. In the end, he went through 250 apple fritters and was able to raise $2,000 for the Chrysalis Foundation in two short hours.

I love this simple story because it shows the impact one person with an idea can have. All it took was a couple posts to Facebook and a willingness to do something out of the ordinary. All of us have the ability to tap our networks and do something for the greater good. Share something you enjoy with those around you. You never know when a simple conversation over drinks, or fritters, may turn in to something great.